Hokusai’s iconic woodblock print, Great Wave Off Kanagawa is certainly the most famous Japanese art object in the world, and illustrates in a most beautiful way the power of nature, a theme that is celebrated in all forms of Japanese art, from Shinto beliefs in kami (nature spirits) to landscape and flower painting on scrolls and screens, to intricate lacquer, ceramic and metalwork. 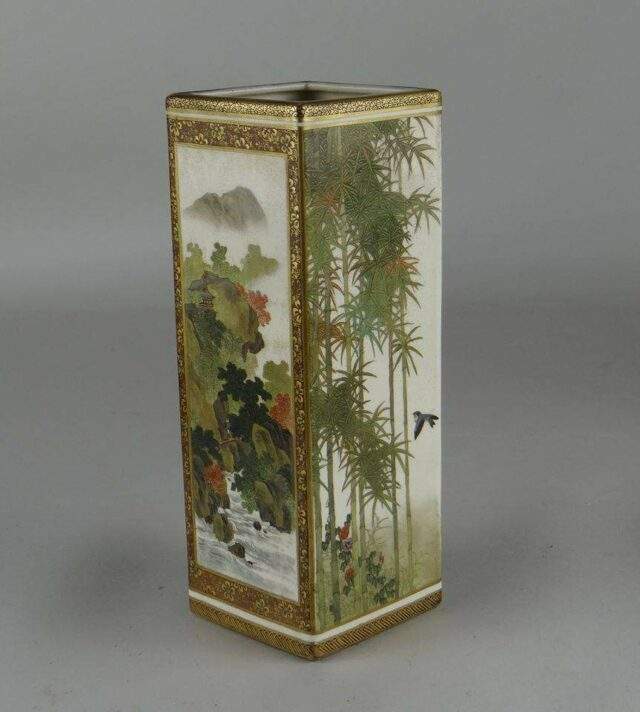 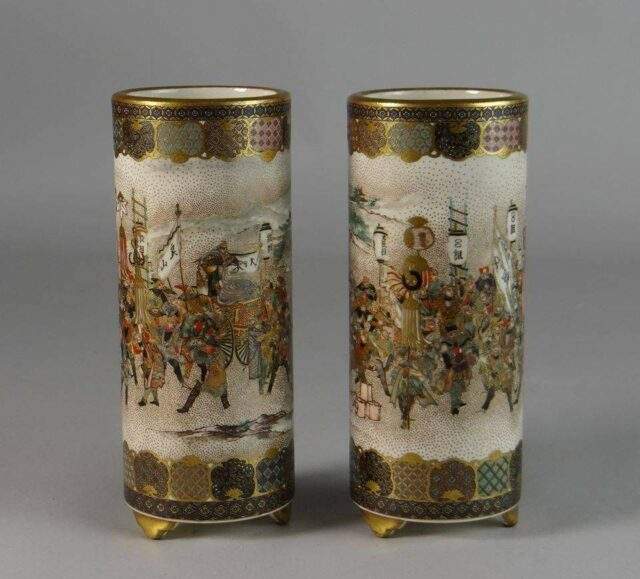 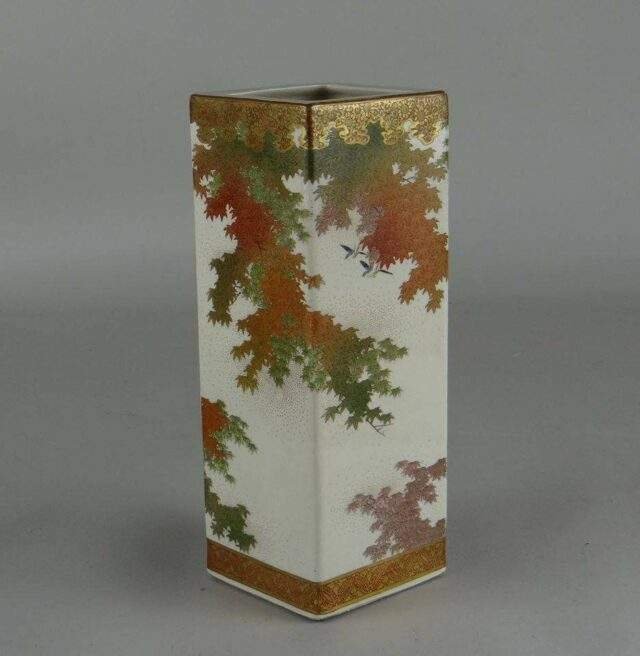 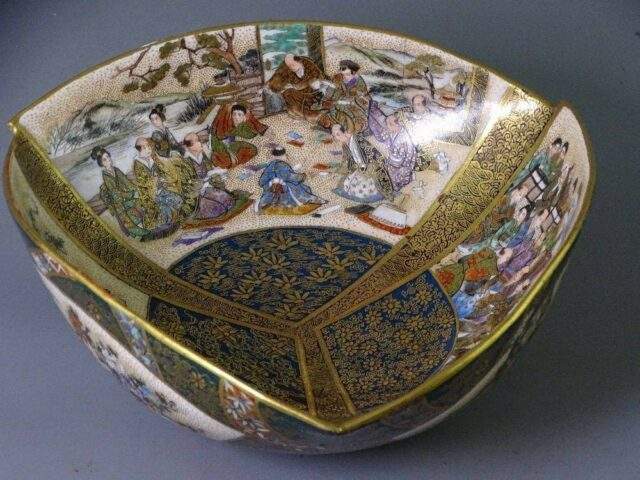 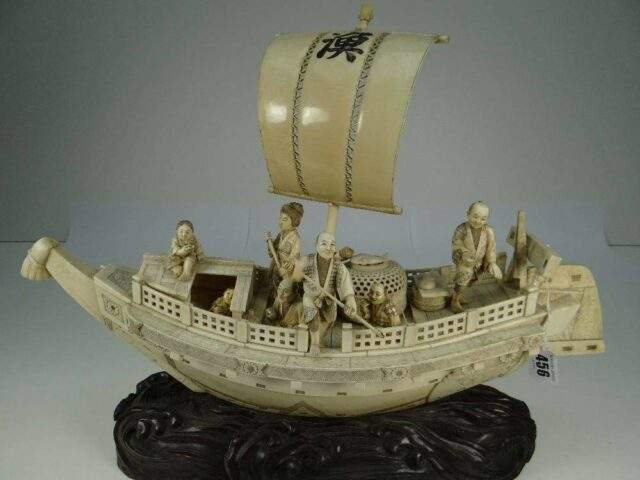 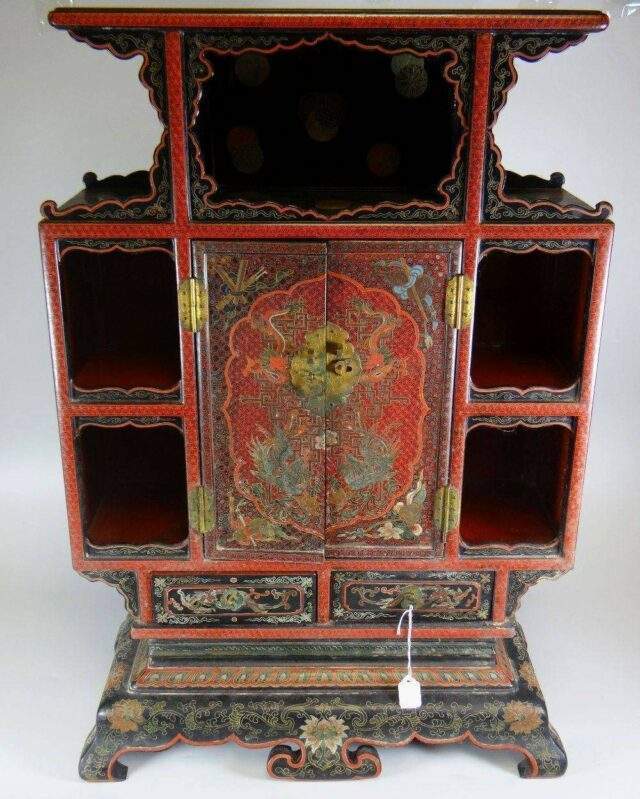 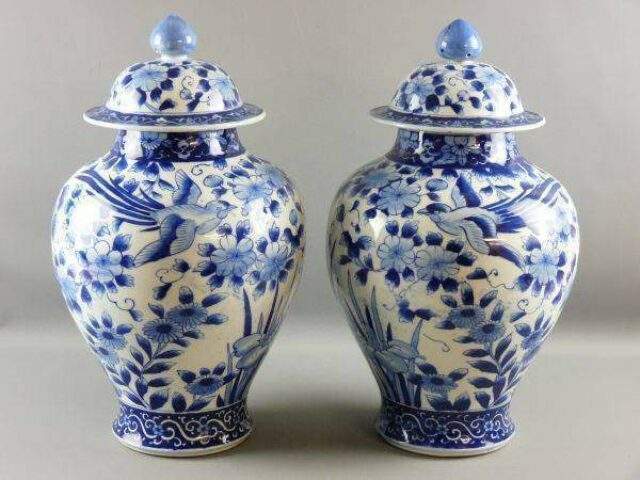 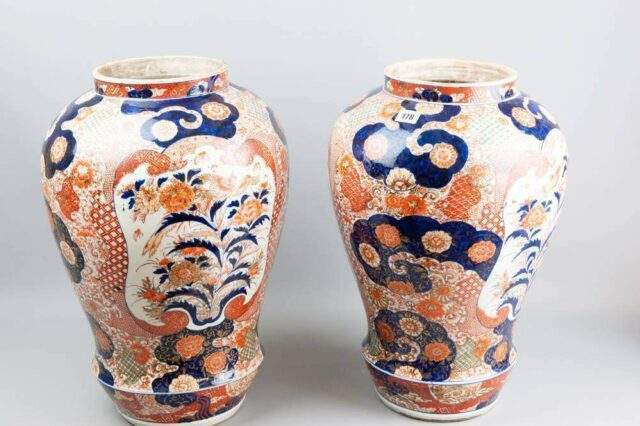 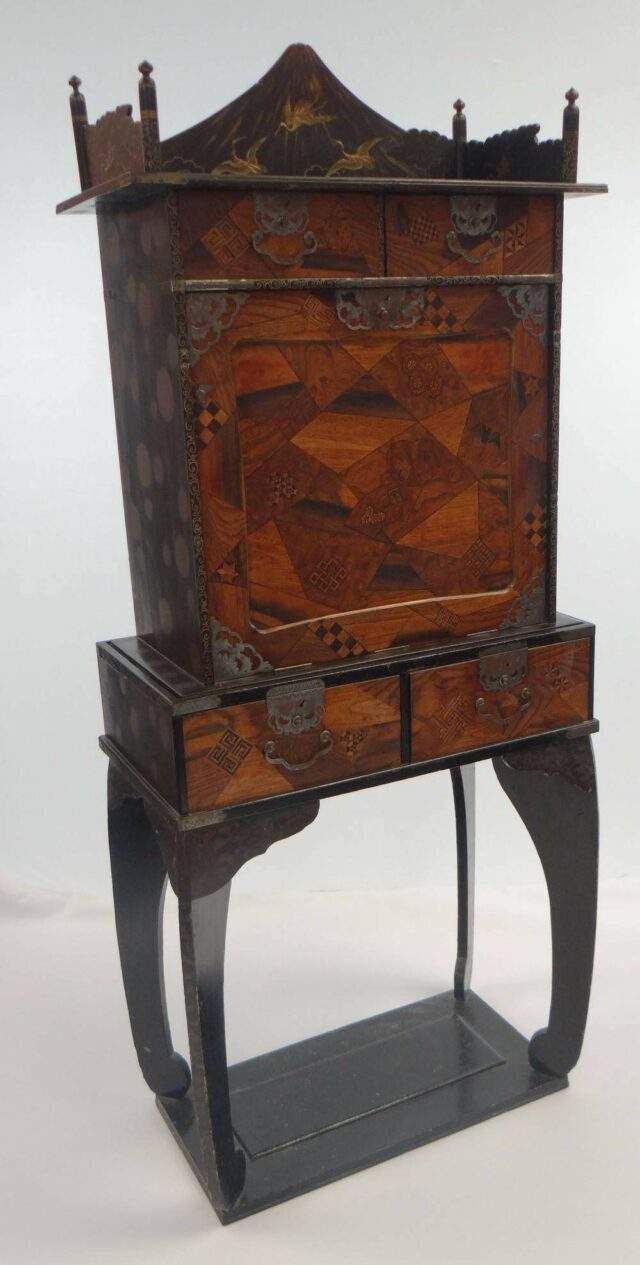 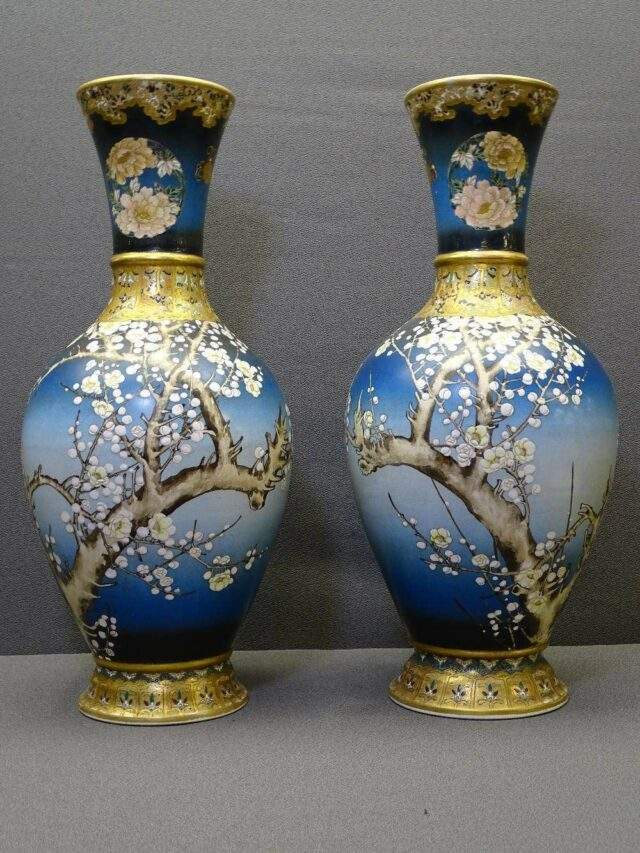 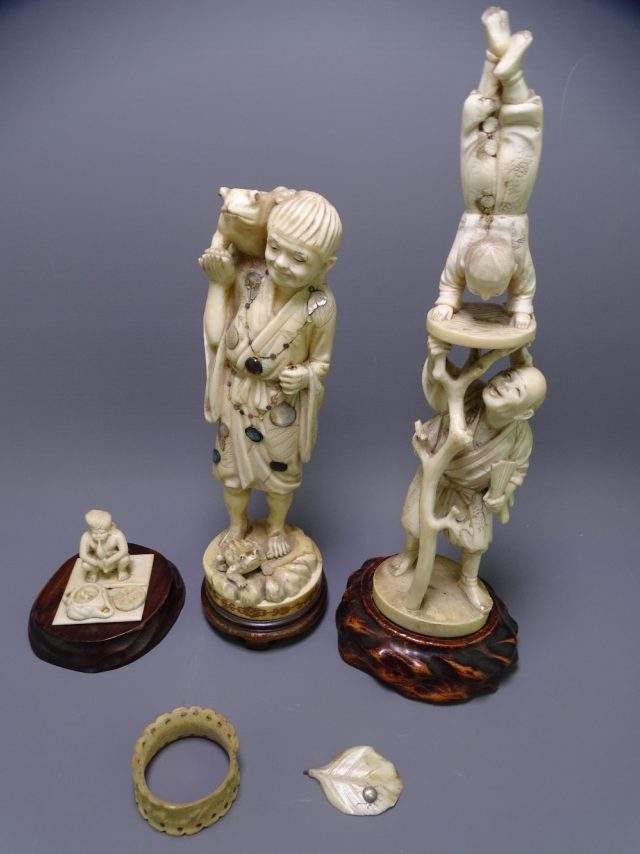 The Satsuma kilns were established in the 16th Century and developed in the 17th Century with the introduction of captured Korean potters, however most of what we see today was made and exported to the west from the end of the Edo Period, through the Meiji restoration until the Taisho Period (early 19th C. - early 20th C.) This highly ornamental nishikide satsuma is a low fired, cream coloured earthenware decorated with coloured enamels and lavish gilding. The glaze has a fine craquelure formed as a result of uneven contraction between the body and glaze during cooling. Objects usually consist of vases, incense burners (koro), other sorts of containers, and sometimes dishes and figures. Decoration is largely minutely drawn landscapes, flower studies or figural scenes. Another characteristic which sometimes can be found near the mark or incorporated into the decoration is a circle containing a cross call a Shimazu kamon. The best workshops were established in the cities of Kyoto, Osaka, and Kobe. Workshops and decorators’ names to look out for include Kinkozan, Ryozan, Gyokusan, and the most sought-after artist, Yabu Meizan. One decorative element which is highly prized by collectors is the use of a particular shade of blue enamel. By the 1930s, the overall quality declined as production increased, and poorly conceived, garish wares with tube-lined decoration were exported in ever increasing numbers. The value of these pieces is correspondingly modest.

Imari is in fact a port in Arita province, through which the vast majority of porcelain made for the west for exported via Nagasaki. It is characterised by the colour palette of underglaze cobalt blue, overglaze iron red and gilding. First developed in Japan in the late 17th Century, and was copied in China, Holland, and the UK. Most items date from the 19th Century. Early 19th Century Imari is generally collected and consists in the west of lidded baluster vases, bowls, and dishes of all sizes. These can be found decorated the mantlepieces and formal rooms of many great stately homes in the UK. Kutani porcelains are divided in to old (Ko-Kutani and new (Ao-Kutani) with their corresponding colour pallets. The former is characterised by the uses of muted greens, aubergine, mustard, and blue enamels, whilst the latter with bold orange-red and gilt. Ko-Kutani is rare and rather refined and scholarly, and more valuable generally that its later descendant which is often more decorative. The porcelains known as Kakiemon, use beautiful pastel enamels and are enamelled in painterly, asymmetric style with designs of birds, flowers and figures on vases, jars, dishes, and statuettes. First produced in the 17th Century, they are rare and the most sought after of all Japanese ceramics.

Many of these objects originate in the Edo period, when Japan was racked with a succession of internal conflicts between warlords. Sumptuous armour and elegant swords and fittings were produced for samurai warriors and are often extremely valuable. Following the restoration of the monarchy in 1868 under emperor Meiji, the carrying of swords was forbidden, and armourers turned their hands to produce decorative works of art using techniques used in making sword fittings. Beautiful bronze and silver decorative vessels and sculpture were produced, some delicately inlaid in gold, copper, and silver in by such artisans as Miyao, Munetoshi, Seiya and Eisuke.

It is the striking perspectives achieved by woodblock artists of the Edo and Meiji periods that captured the imagination of artists like Monet, Whistler and Degas who helped to popularise Japanese art in the west. Prints from the original block by artists like Hiroshige, Toyokuni and Utamaru can make many tens of thousands, though more prints from later blocks can still be bought for around £100.

The imminent UK ban on selling ivory has impacted the market for collecting ivory netsuke, and as a consequence the value of wood netsuke is set to rise. These little carved toggles were attached to small stacking boxes (inro), often in decorated lacquer, and suspended from kimono sashes (obi) to hold medicines rather like a tiny handbag. Such is the variety of subjects and style these little sculptures and boxes are keenly sought after particularly in the US.

Rogers Jones & Co. offer fine quality Japanese ceramics and Works of Art in the Selections and Collections sale, whilst more modest, decorative items will be found in our Ceramics and Vintage and Antiques sales 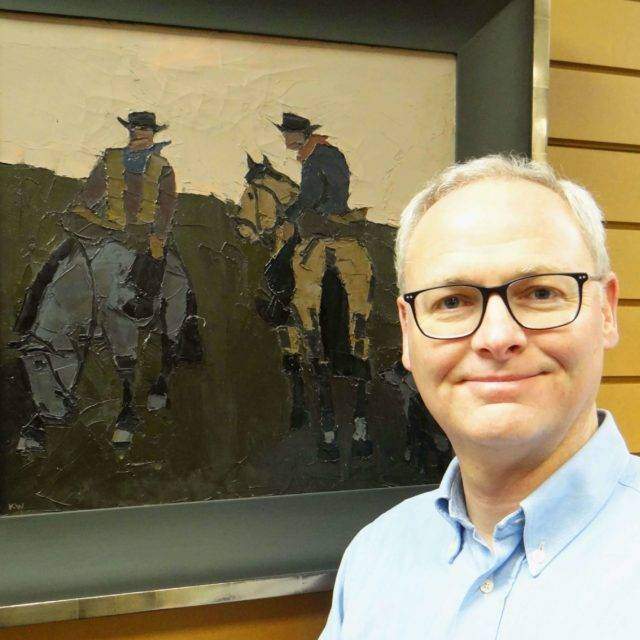 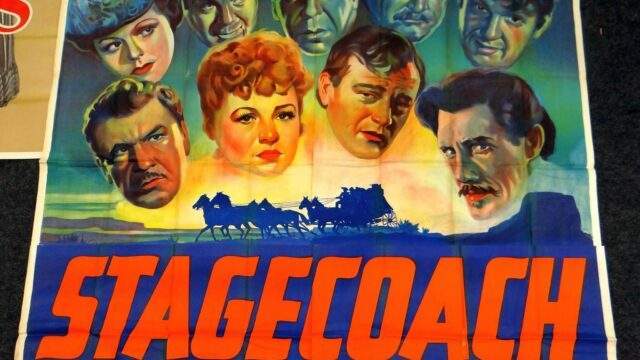 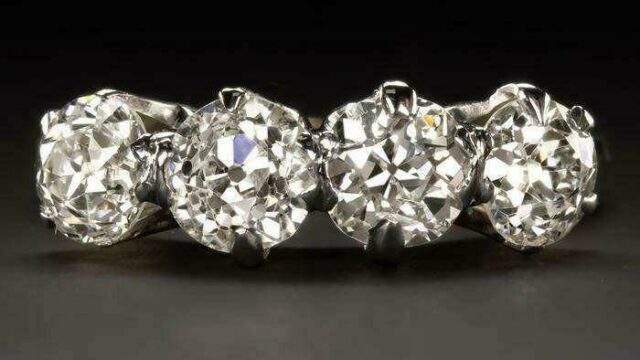