Britain has for centuries been one of the largest wines, port and champagne markets in the world; and so it follows that British craftsmen have produced a huge variety of refined objects for formal dining over the centuries. Today the market for quality wine antiques is thriving and it is increasing in popularity every season.

From engraved wine glasses, to beautiful Georgian wine coolers, to gold claret jugs, silver wine-labels, tantaluses, corkscrews and ewers. Not forgetting the artworld too, where wine themed paintings have been a common subject matter for artists throughout the last two centuries. It is although that Bacchus himself has been busy commissioning artists, silversmiths, glassmakers and cabinetmakers.

In the 17th and 18th Century, wine was generally cellar stored in casks, and brought to the table in dark green glass bottles, sometimes with the family crest of the owner or year date stamped on a seal on the shoulder.
They were blown in several shapes, the most desirable being the onion shaped bottle. Prices start at a few hundred pounds for a standard example of around 1800 but expect to pay four or even five figures for a good early 18th or 17th Century “sealed and dated” onion shaped bottle. Earlier this year a hoard of 17th Century bottles were discovered during excavation on a building site:

English drinking glasses of the 18th Century come in a huge variety of shapes and sizes, with differently shaped bowls for different types of wines, plain or shaped stems with air bubbles or white or coloured enamels twisted into them, and engraved decoration. Glasses decorated in support of the 1745 Jacobite uprising engraved with motifs (portrait of Bonnie Prince Charlie, a rose, or the legend “Fiat”) are desirable particularly in the US, and glasses enamelled in Newcastle by the Beilby family around 1760 are very sought after. During the late 18th and early 19th Century the bowl volume increased, the engraved decoration gave way to cutting in various patterns, coloured glass became popular and matching suites of glasses appeared were produced. Standard 18th Century examples can be bought for under £100, whilst a rare yellow colour twist stem wine can make £15,000.

The need to decant wine, primarily to filter out the “dregs” which collected in the bottom of the bottle, saw the development of the wine decanter. From the 1730s decanters were produced in singles and in sets, in coloured and clear, cut glass of different shapes according to fashion. The need to identify the decanted wines and spirits necessitated the development of decanter labels, or wine labels as they are usually known. They consist of small plaques marked with the name of the contents, hung around the neck of the decanter or bottle by a chain or ring. Over 2300 different names of wines, spirits and liqueurs have been recorded, some unfamiliar to many modern drinkers such as “Bucellas”, “Mountain”, “Paxaretta”, “Smyna”, “Green Shrub”, “Cream of the Valley” (a polite reference to Whisky) and “Nig” (Gin spelt backwards to fool the servants).

Most 18th and 19th Century wine labels are made in silver and reflect the art of the silversmith in miniature and often exhibit the highest level of craftsmanship. Notable makers to look out for are Paul Storr, Hester Bateman and Benjamin Smith. Collectors often plump for sauce or condiment labels as an alternative, such as “Anchovy”, “Garlick”, “Lemon” or “Kyan”. Labels were also made in enamelled copper, Old Sheffield plate, ivory, porcelain and mother-of-pearl. Prices start at around £50 for an early 19th Century die-stamped silver label with a common name to well over £1000 for one by Storr.

Corkscrews are extremely popular collectibles. Those from the 18th Century tend to be simple devices involving a handle and steel “worm”, but sometimes they are cased in decorated ivory or enamel. Most late 19th Century corkscrews have novelty handles whilst early to mid-19th Century examples have ingenious mechanisms involving clamps, ratchets, pins, wings or concertinas and many patents were registered for the simple procedure of extracting a cork! Most can be secured for under £100, whist real rarities can sell for many thousands. A Robert Jones no. 2 corkscrew patented in 1842 made over $36,000 in 2012. Other collectible items include wine glass rinsers, silver or Sheffield plate bottle coasters, wine funnels, wine coolers and punchbowls.

The most luxurious of drinking vessels must surely be the claret jug. The rarest and most expensive wine would need to be served from a vessel of equal calibre and the best manufacturers in Britain were commissioned to make jugs for the highest ranks of aristocratic society in silver, gold and glass. Stourbridge glass companies like Stevens and Williams and Thomas Webb produced beautiful coloured, etched or engraved bodies which were mounted by leading Victorian silversmiths.
Surely the most famous golfing championship in the world, The Open, awards the winner “The Golf Champion Trophy” better known as the The Claret Jug, made in silver in 1873 by the Edinburgh firm of Mackay and Cunningham. There is a Daily Mail article on the jug here:

If you enjoy your wine and are considering collecting associated antiques, then Rogers Jones & Co. regularly offer wine and spirit related antiques in our Vintage & Antiques and in our Selections & Collections auctions.

Below is a selection of wine related antiques sold at our salerooms in the recent auctions with prices noted.

Items can be valued free of charge without obligation. Please contact: 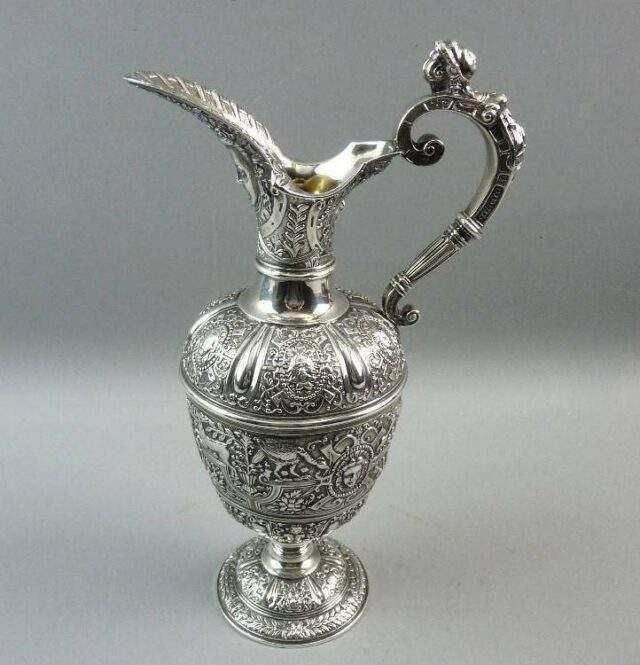 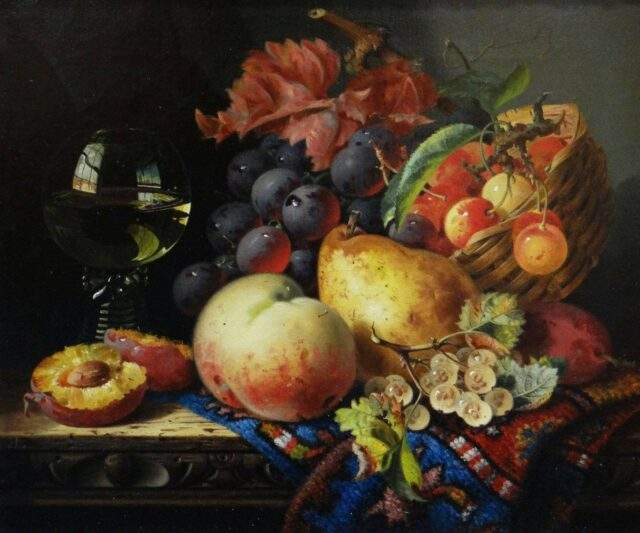 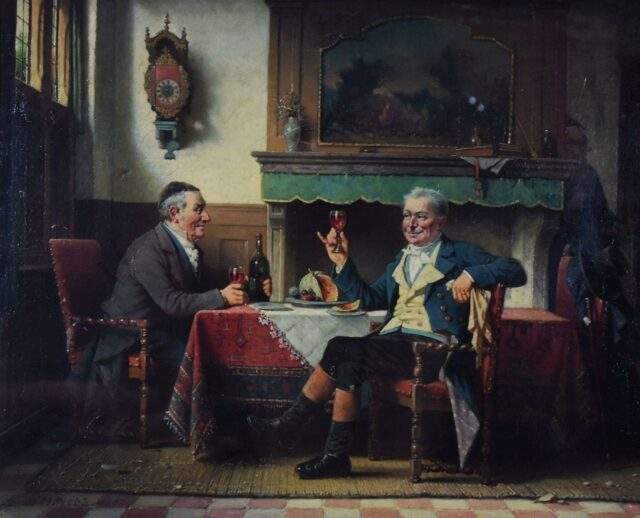 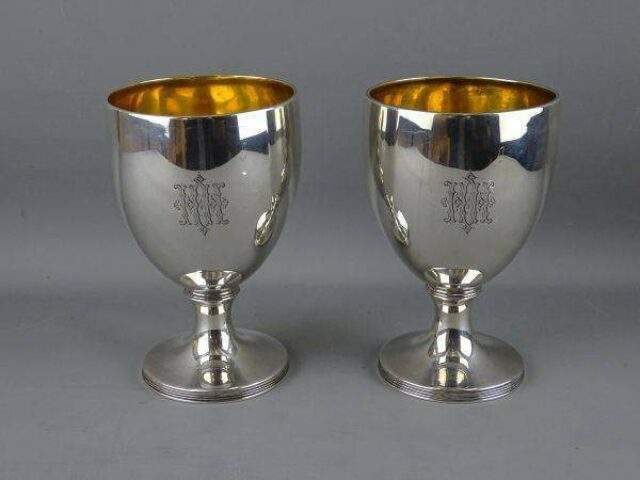 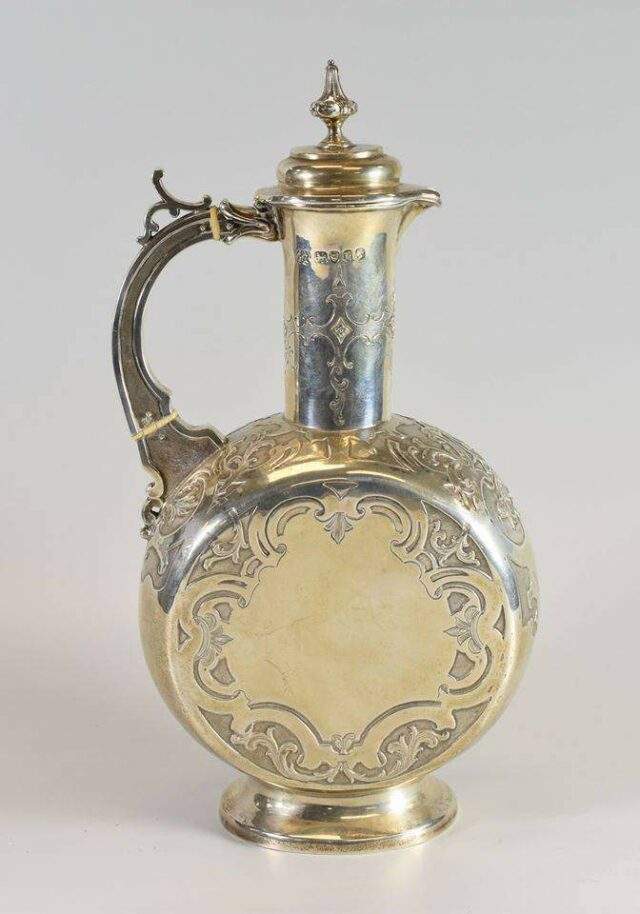 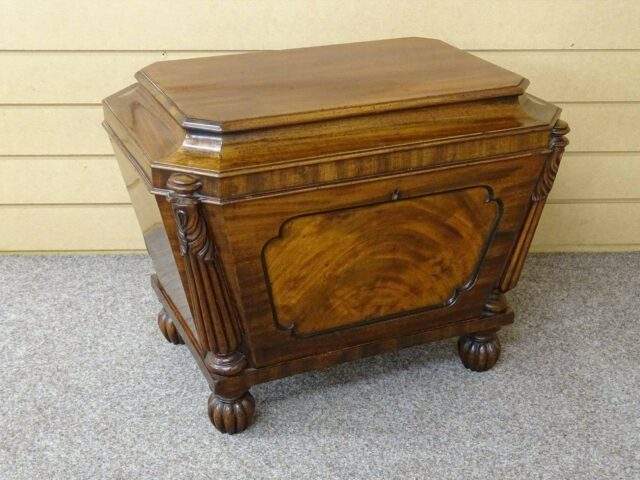 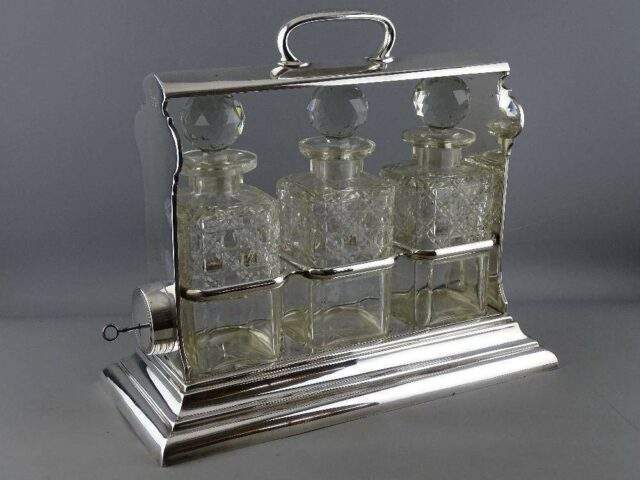 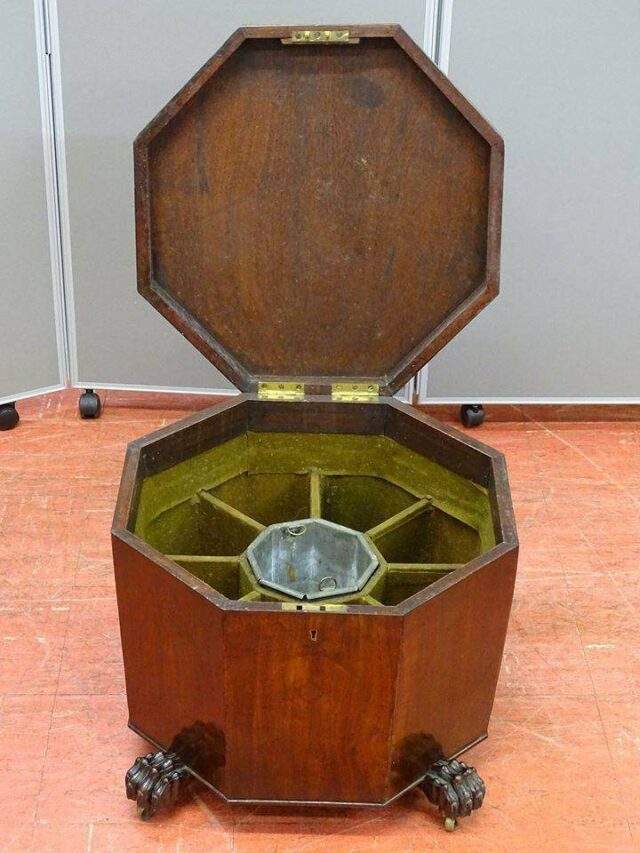 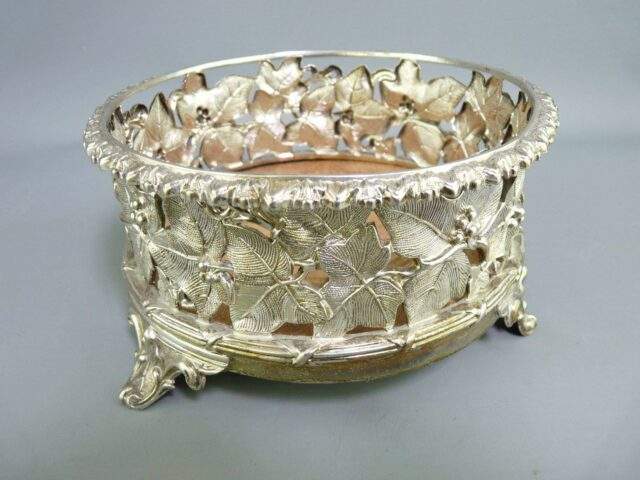 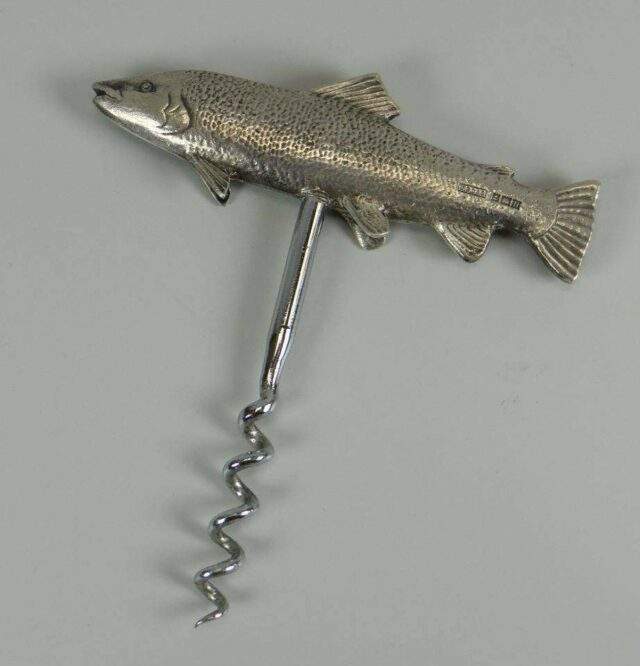 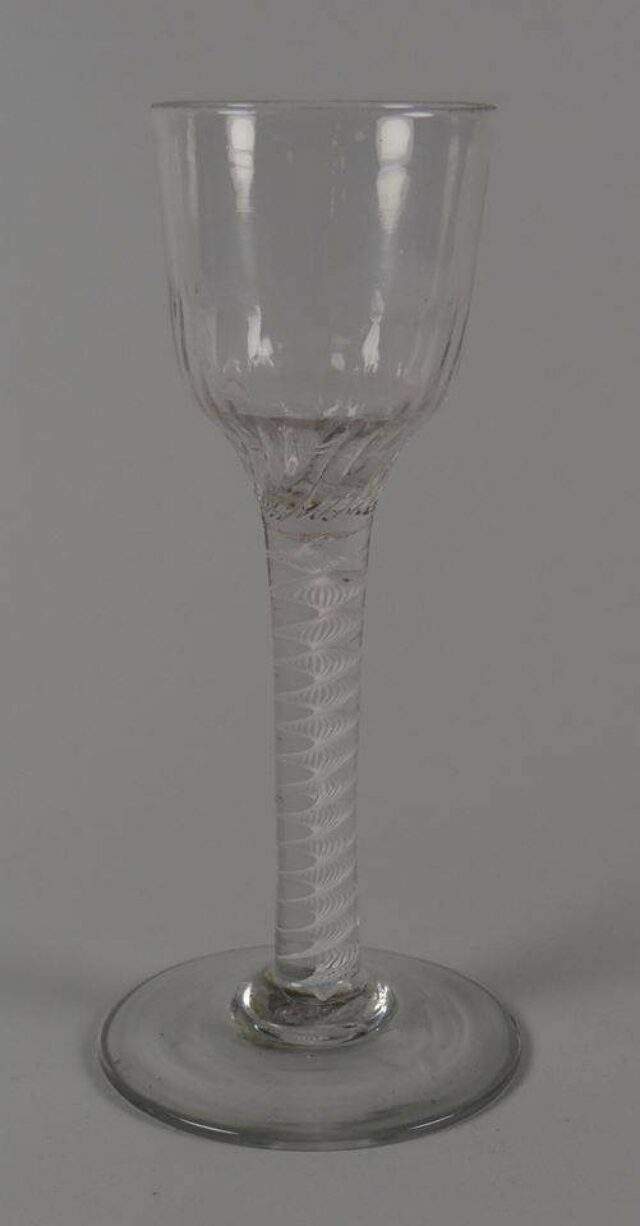 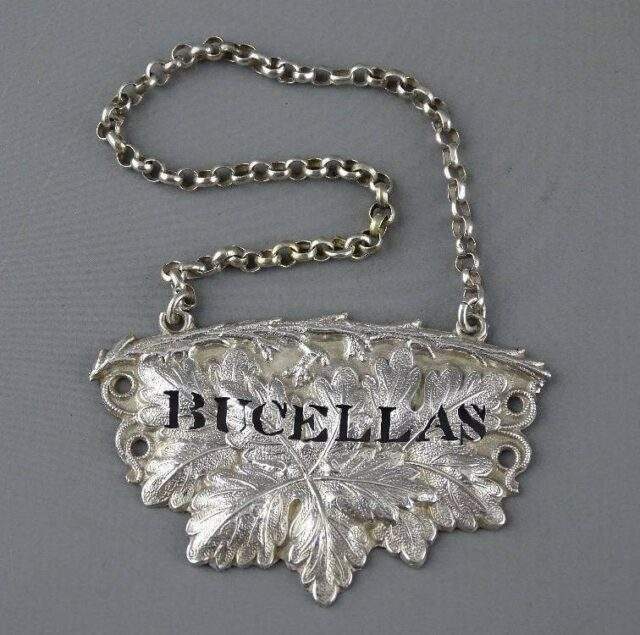